On their first release,Retrofitting, Number Three Combo explored a sound utilizing acoustic instruments like guitar, flute and hand percussion, with occasional synth to create both folky songs and more cinematic style soundscapes, often with a Middle Eastern flavour. On their second album, 2016‚Äôs Solarium, they explored similar territory, but they replaced the acoustic guitar with synthesizers for a much more electronic album. For Resurfacing, which is their final release, Number Three Combo shake it up again, this time producing a more traditionally song based album, without sacrificing the elements developed on the first two recordings. Returning for this outing are ex-Black Sun Ensemble members Eric Johnson on guitar, keyboards, and vocals and Joe E. Furno on flute and vocals, joined again by Cobracalia‚Äôs Carl Hall on djembe and dumbek. Assisting them on this album are former Cobracalia/Muddy Bug drummer Darin Guthrie and bassist Zac Seasley.

The album opens with the title track, a brief percussive instrumental echoing the more cinematic elements of the previous albums. It‚Äôs followed by The Diamond Mine, which is probably the closest thing to a Black Sun Ensemble track you‚Äôll hear on this album. For those unfamiliar, it has a bit of a Kashmir vibe. With its heavy riffing, the Zeppelin influence is heard again on one of the tastiest tracks on the album, Killing Time,¬Ýbut this time the music also has a bit of Tull vibe to it as Furno rocks out like Ian Anderson on his flute. But after that, the album takes off in many different directions. There are the rockers, like the slow and bluesy Heavy Is the Hand,

¬Ýthe Stones flavoured teen high school stomp of Friends,¬Ýand the rollicking yet strangely moody and spacey Fog and Steam.¬ÝLaziness Is Next to Godliness, the longest track on the album at just over 6-minutes, returns to the more cinematic sound of their first two releases, with an atmospheric instrumental excursion in three distinctive parts that magically come together as a unified whole. You‚Äôll also hear stirring ballads like the lovely acoustic and quite spacey Band Blues, the moody and fatalisticNot for Long, and the haunting Walking in the Air, a cover of a song from the popular UK children‚Äôs holiday classic The Snowman.

Speaking of covers, I like that the band¬Ýchoose less obvious tracks to cover. Sure, everyone from Tom Petty to Haim have covered Fleetwood Mac‚Äôs Oh Well (Part I), but few if any have covered the lesser known Oh Well (Part II). The song dates back to 1969 when it was released as a single, with Part II as the B-side. Both parts were later added to a revised version of Fleetwood Mac‚Äôs 1969 LP Then Play On (also released in ‚Äô69). It‚Äôs a perfect choice for the band to cover as it delves into both traditional blues rock and classically influenced cinematic music. They preserve the bluesy vibe of the original Part I, but give it a bit of progressive edge with Furno‚Äôs furious flute playing and Part II¬Ýis a beautiful and quite stately, acoustic meditation that adds soft synth swells for a haunting¬Ýatmosphere. The album ends with Let It Play to the End, a rousing, melodic and joyous rocker (another of the truly standout tracks on the album) that segues nicely into the short final piece, End(less), a slow, swirling ambient fade out.

Over the course of their short career, Number Three Combo have left a legacy of fascinatingly varied musical ideas that nonetheless draw on the core power of the three main members giving it all a distinct and unique delivery. Resurfacing is less a summation of their sound, but more an addition to what had come before. But with songs like Not For Long and Let It Play to the End that echo the closing out of a story, Resurfacing is a fitting final chapter to the band‚Äôs saga, and just an all-round great listen.

BY JONATHAN LEVITT It was a sad day when the latest cd and accompanying press release from Slowburn Records arrived in my mailbox here in Santa Fe, New Mexico. In it, label doyen Eric Johnson explains that this is to be the final release of new music from the label, and that he‚Äôll be focusing his efforts on archival releases, as he moves on to a new stage in his life. Slowburn, for those not in the know is the label that brought the reformed Black Sun Ensemble‚Äôs music to a wider audience, as well as projects from Sundarata, and the mighty Sun Zoom Spark. If there was ever a label in Tucson, free from the Gelb-axis of power, that typified a completely open space where artists could create to their hearts content then Slowburn was it. Over the years, Eric Johnson in association with an assorted cast of characters from the Tucson music scene managed to push musical boundaries and keep Tucson just weird enough to always wonder what new fascinating project lay right around the corner. Alas we come to Number Three Combo‚Äôs Resurfacing record with its killer cover drawn by Chicago artist, Ben Johnston. Eric Johnson has never shied away from his love of Arabic influenced rock, cue up Black Sun Ensemble‚Äôs numerous releases, or maybe it‚Äôs the Kashmir effect (speaking of Zeppelin we‚Äôll get to that later!) ‚ÄúThe Diamond Mine‚Äù is a cryptic number that has numerous intricate layers interweaving with each other. It‚Äôs a real tour-de-force that displays a myriad of influences that have propelled Johnson and crew forward. Here on exhibit is the fascinating amalgam of Black Sun Ensemble and Jethro Tull. On this track, Joe E. Furno (Inferno) turns in some stellar flute playing and as always Carl Hall mesmerizes with his hand drums and assorted percussive elements. If there‚Äôs a downside to the song it‚Äôs the extremely cold production that makes it feel a tad distant. Thankfully the song is powerful enough to rise above such sonic limitations. ‚ÄúKilling Time‚Äù is a blistering number that shows off Eric Johnson‚Äôs move into being a much more confident singer. I had to do a double take when I heard a few measures of Zeppelin‚Äôs ‚ÄúStairway to Heaven‚Äù thrown into the mix. Indeed, this song is a showcase of Johnson‚Äôs earliest musical influences, from Zeppelin, to a smidgen of Deep Purple and a healthy dose of Jethro Tull. ‚ÄúFriends‚Äù is the closest the combo has come to making a commercial radio friendly tune. Part Tom Petty, part Alejandro Escovedo, the track shows a fascinating foray into a type of music the band have never attempted and show that they could easily have turned their focus that direction and maybe even one day appeared on Austin City Limits. The band blow things wide open with the cover of Fleetwood Mac‚Äôs ‚ÄúOh Well Part 1‚Äù and ‚ÄúOh Well Part 2‚Äù. This is a masterclass on how to cover a song. Fresh, nuanced and lovingly rendered the band shine here in a total shocker, that truly blew me away. ‚ÄúFog and Steam‚Äù feels like a reworking of the Cesare‚Äôs Dog classic ‚ÄúShucks for Johnny G‚Äù, funky and tight, the song is another head turner that shows how truly diverse and talented Number Three Combo is. This band out of all the one‚Äôs Eric Johnson has been associated with has probably given him the widest berth for his myriad influences to play, react and collide with one another. Resurfacing is a fascinating record that to be honest works best when the band forgo the mystical myrrh infused numbers and let their rock side shine through. This is hard for me to write because those middle eastern tinged numbers are what attracted me to the band in the first place. To be honest though and I think this is the secret to the title, here the band are ‚Äúresurfacing‚Äù what the band are capable of as they venture into uncharted waters. Sadly, since this is the end of the road we‚Äôll never know where those uncharted waters could have led. Show some love and get a copy of this album while you can, it‚Äôs definitely an amazing journey and worth every penny. DOWNLOAD: ‚ÄúOh Well Pt.1‚Äù ‚ÄúOh Well Pt.2‚Äù ‚ÄúThe Diamond Mine‚Äù ‚ÄúKilling Time‚Äù ‚ÄúFriends‚Äù ‚ÄúFog and Steam‚Äù 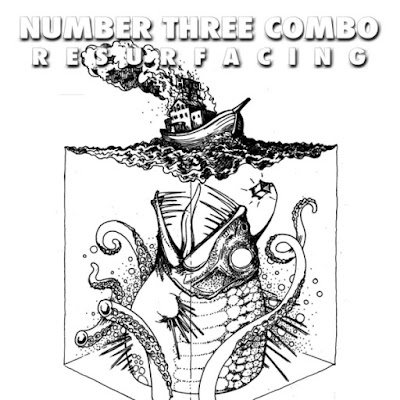 Number Three Combo - Resurfacing (SlowBurn Records, 2017)
Multi-instrumentalist Eric Johnson has spearheaded Tucson, Arizona-based SlowBurn Records for three decades, and the label celebrates its 30th anniversary with the third and final release from Number Three Combo. Sadly, it also represents SlowBurn‚Äôs final release of original material, although Johnson promises to release archival material from label favourites like Black Sun Ensemble, Sun Zoom Spark, and many others. So fans of the label will have many new and interesting releases to anticipate, but we‚Äôll take a few moments to rejoice and sing the praises of another fine musical biscuit from this heady quartet.
NTC has always dazzled with its eclectic mix of folk, rock, electronica, and Middle Eastern influences and the latest is no exception. ‚ÄòThe Diamond Mine‚Äô combines flute, dumbek, and Moog to place you square in the middle of an eerie desert wasteland, flying across the sands. Johnson prepares you for your trip with the encouraging admonition, ‚ÄúJust think how high you will fly, wide awake in endless flight‚Äù. Musically, the arrangement will please listeners who recognize elements of Johnson‚Äôs earlier work with Black Sun Ensemble throughout Number Three Combo‚Äôs discography.
‚ÄòKilling Time‚Äô ventures towards the rockier side of NTC‚Äôs repertoire and we all know what Johnson means when he sings ‚ÄúIt‚Äôs better to trip and fall/than not to walk at all.‚Äù [Wink wink, nudge nudge!] ‚ÄòHeavy Is The Hand‚Äô is heavy indeed, a stomping, trawling bluesy swagger, punctuated by Joe E. Furno‚Äôs forceful flutework. Next up we have a rather surprising interpretation of Howard Blake‚Äôs ‚ÄòWalking In The Air‚Äô from the perennial holiday favourite The Snowman. Gone are the falsetto children‚Äôs voices, as Johnson and Co. bring the song back to Earth with seering guitar solos and throbbing percussives.
‚ÄòFriends‚Äô adds a groovy Paisley Underground vibe to the fun, fondly recalling fellow desert dwellers Green On Red, but things then settle into more reflective territory with the subtle ponderable, ‚ÄòNot For Long‚Äô, wherein Johnson likens life (and record labels, no doubt) to ‚Äúsimple three chord songs that only hit after [their] gone.‚Äù NTC are big fans of Peter Green-era Fleetwood Mac and they turn in a blistering version of ‚ÄòOh Well‚Äô, including its rare, more contemplative ‚ÄòPart II‚Äô [from Then Play On], which is a virtual Johnson solo performance. The no-holds-barred arrangement (to Part I) rips the Buckingham-led rendition to shreds, with Johnson spewing the lyrics through a megaphone for full, disorienting effect.
Fans of the band‚Äôs lengthier, freeform jams will certainly welcome ‚ÄòLaziness Is Next To Godliness‚Äù to their bosom, settling down with a nice cuppa and a smooth spliff and pondering whether that really is ‚ÄòPaint It Black‚Äô trying to elbow its way into the party! The story ends with three Johnson solo pieces, the dreamy headnodder ‚ÄòBand Blues‚Äô and the farewell couplet ‚ÄòLet It Play To The End‚Äô (‚ÄúThis side is now over; we let it play to the end/So I fall with the sunset. Yes I made it through every day/ This side is now over; there is nothing more to play‚Äù sung over a strident arena-size backing and a chorus of angelic choir voices) and the lockgroove of ‚ÄòEnd(less)‚Äô, which hints at more to come. Like your favourite record, everything must come to an end and for now, this side, this album, this band, and this label are over. Catch you on the flip side, Eric. Hope you resurface soon!